No products in the shopping bag. 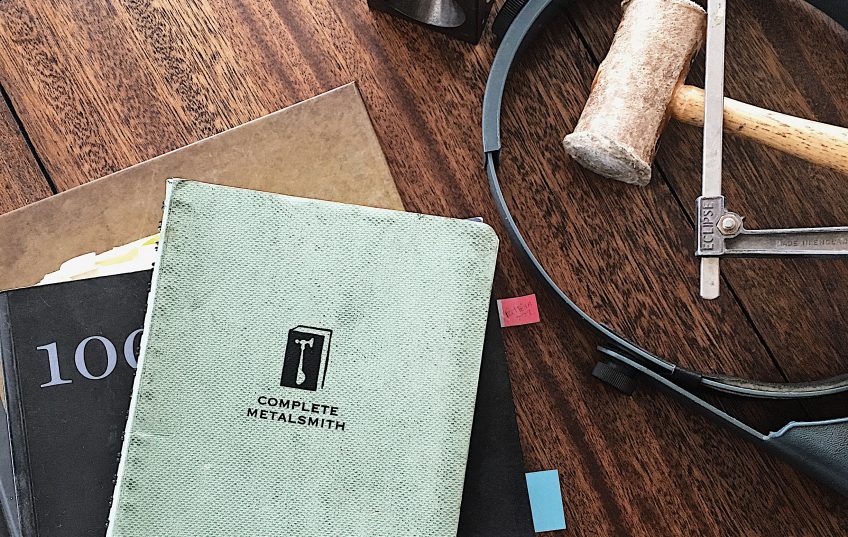 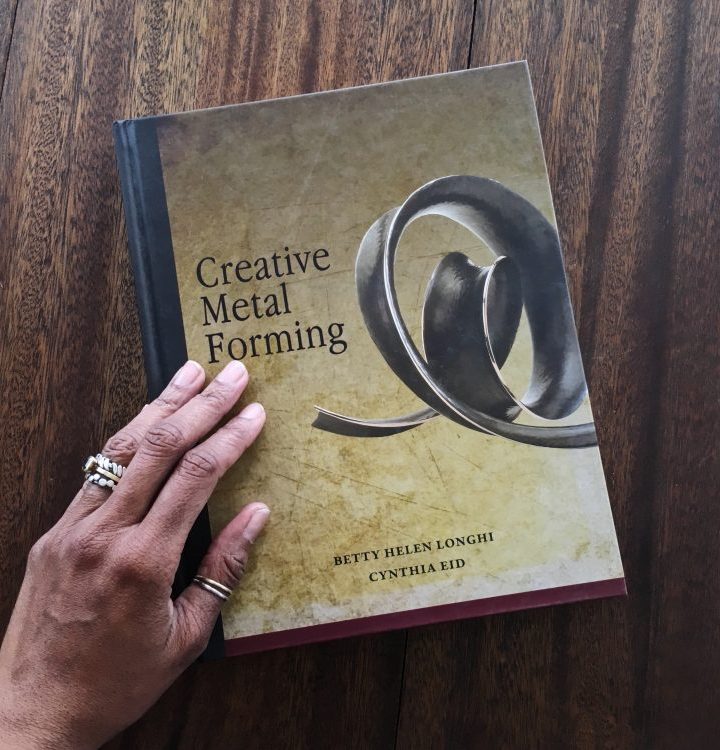 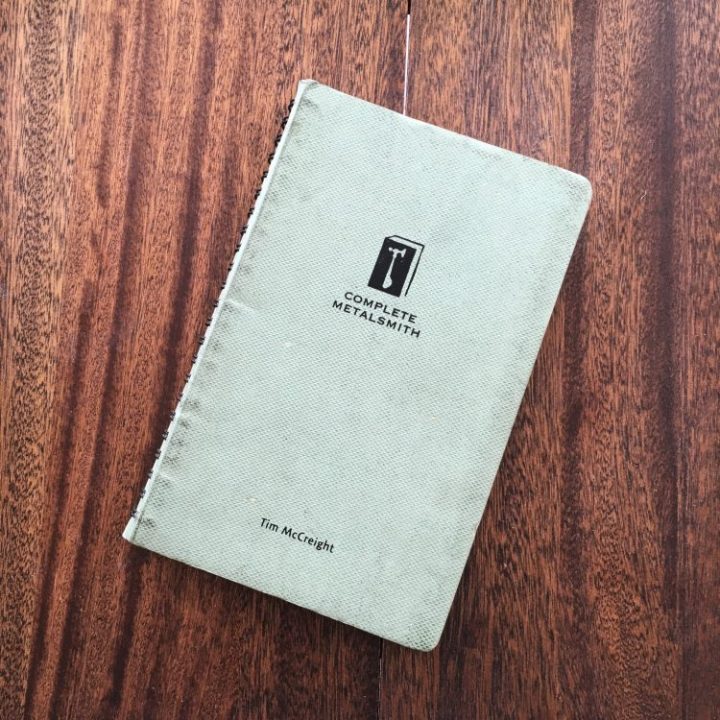 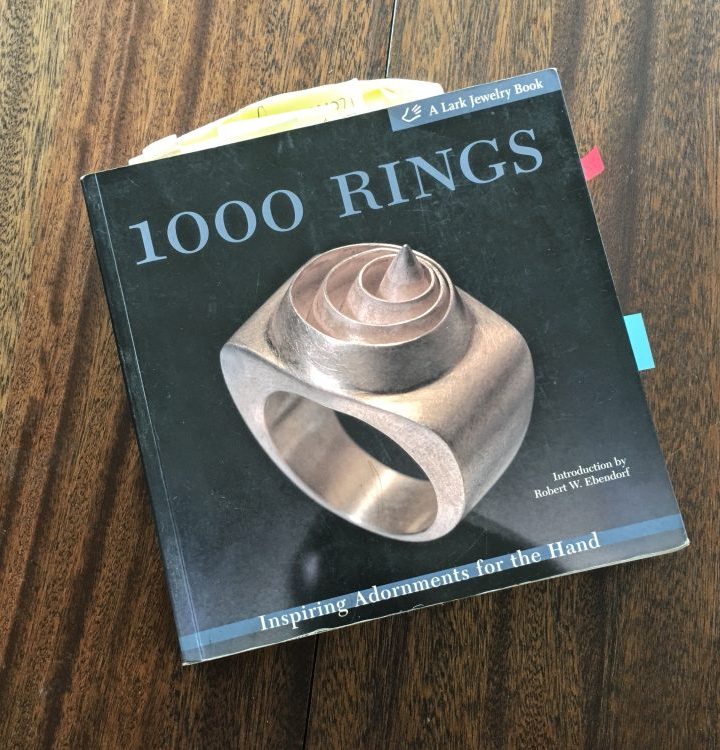 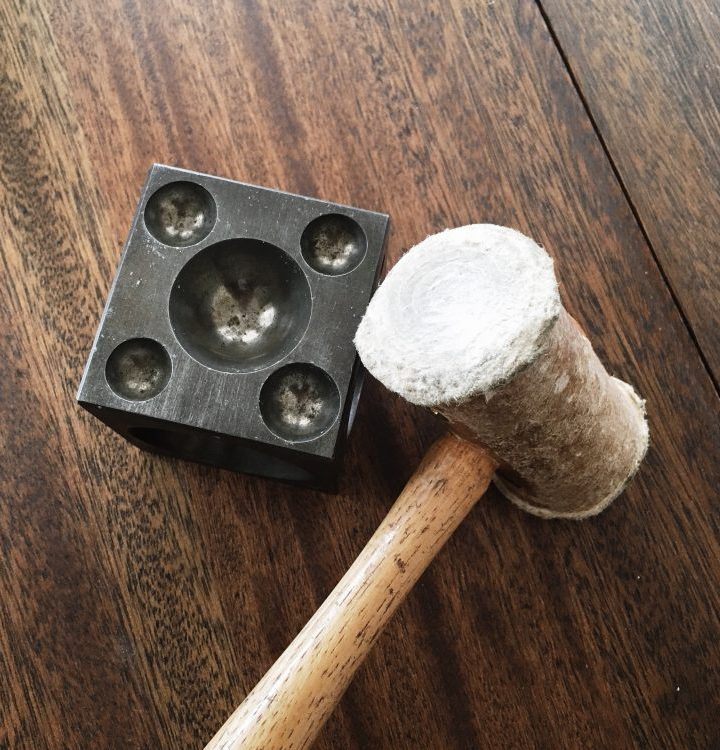 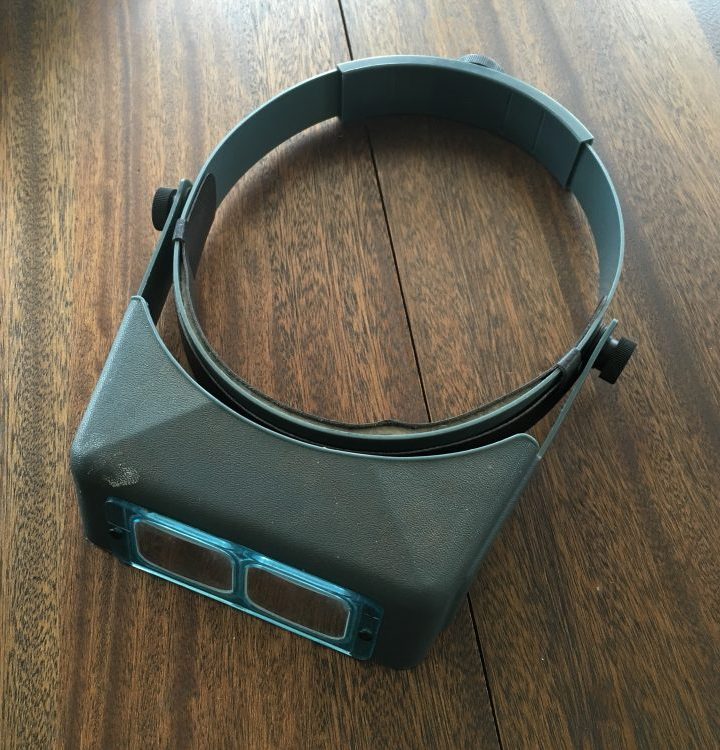 There are a bit of things in my studio that I can't live without.  If I had to choose a few items right here, right now; the first would be my copy of Complete Metalsmith because I refer to it from time to time.   Second would be my copy of Creative Metal Forming; such fantastic book! Inspirational photos and projects to help you learn.  Third would be my copy of 1000 Rings;  it has been my favorite book in my studio for many years! Forth, is my rawhide mallet and my dapping block; my work, right now, consists of a lot of domed circles and these tools help make them.  And fifth; is my Optivisor; I quite quite a bit of fine detailing and these help me see tiny things, without eyestrain.

If interested in more things that "I can't live without"; I wrote a post on jewelry books reading a while back; you can read about them here! 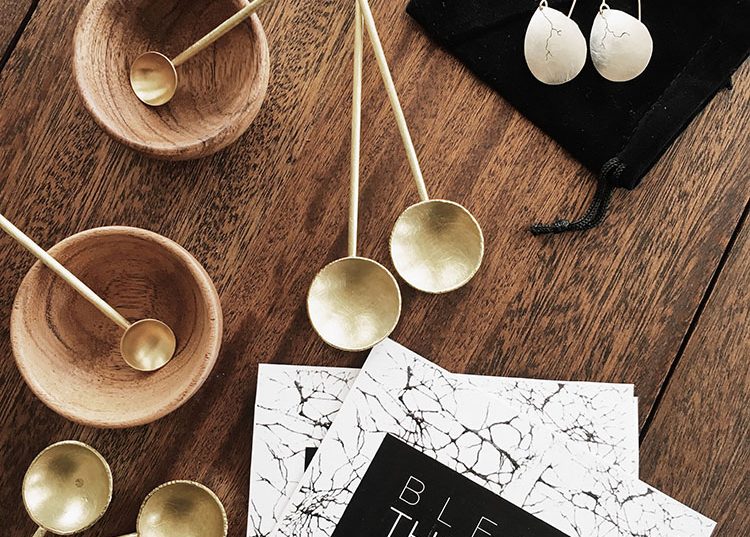 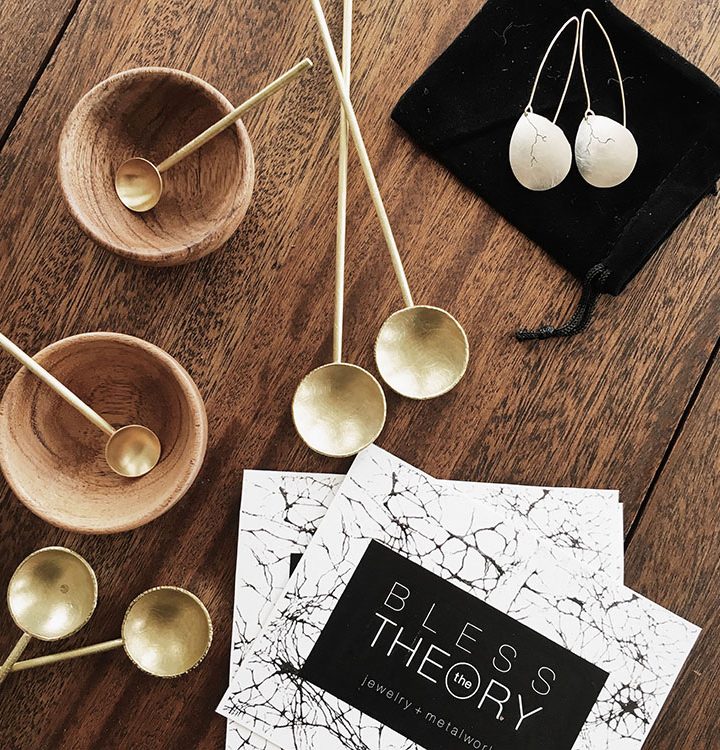 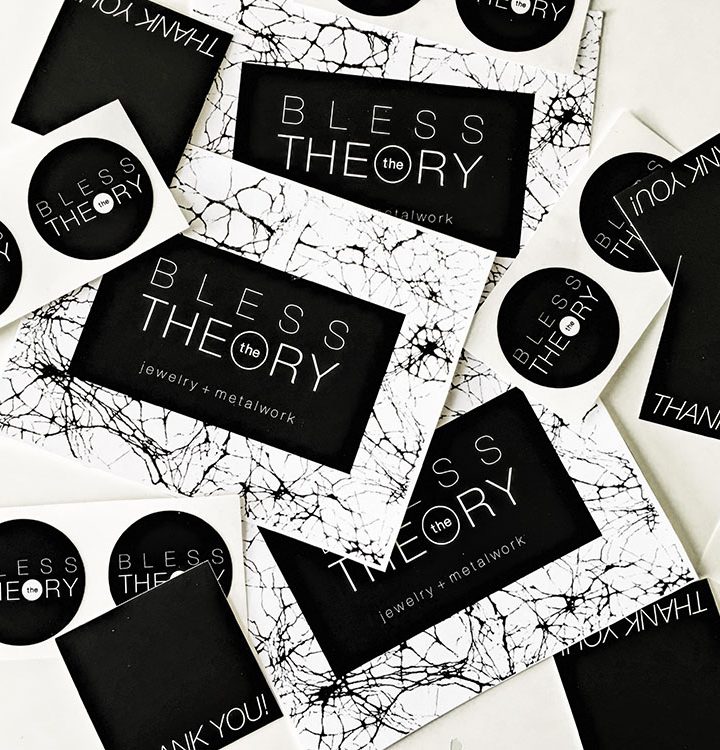 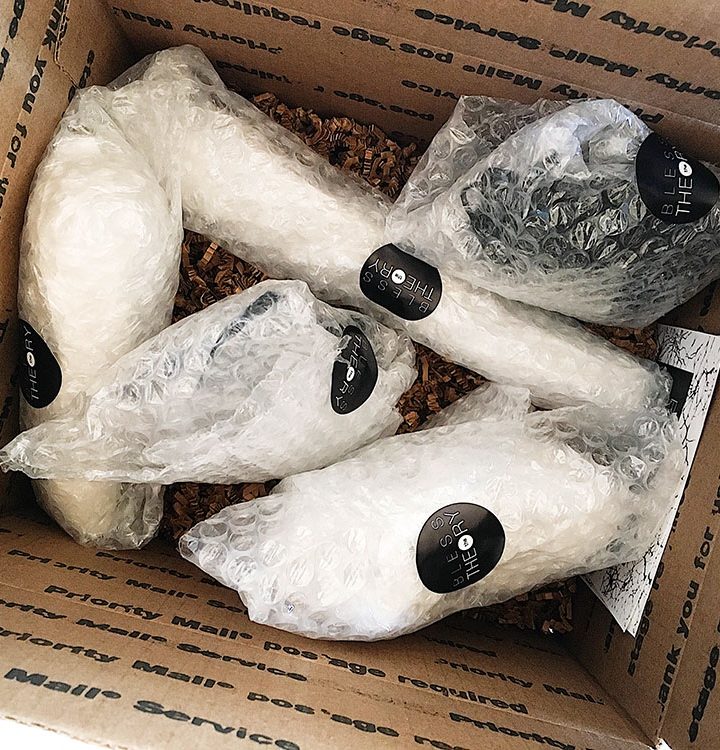 I truly enjoy branding for my business.  I design all of the marketing material for Bless the Theory myself.  It's a satisfying outlet from me that allows my creativity expressed in a different form.  I've got some new ideas for Bless the Theory in 2018 and have spent have spent hours if not days on playing around with concepts.   Because I have the tendency to happily get lost in this area of my business; I give myself time blocks when working on new marketing material.

There is a sense of accomplishment that I feel when packing up orders and sending them out into the world.  I try to imaging the joy that the acquirer will feel when the pieces is in there hands.  What they will were it with or how they will use it.  And this feeling brings much pleasure.  I believe that is part of what keeps motivated as a jeweler/metalsmith.  Yes, its exhilarating to dream up the work and make the work.  But nothing is more satisfying than letting go of the work…as to  give it a new life!

My packing process is much like my studio process; simple and thoughtful.  I make sure every piece that leaves my care is properly protected during shipping.  Jewelry is placed into soft black velvet jewelry bags; while utensils are wrapped in white tissue paper.  Both are jewelry and utensils are then wrapped a second time in bubble wrap and sealed with a Bless the Theory sticker.  I often insert a little note, to the new owner of my work, before sending the package on its way. 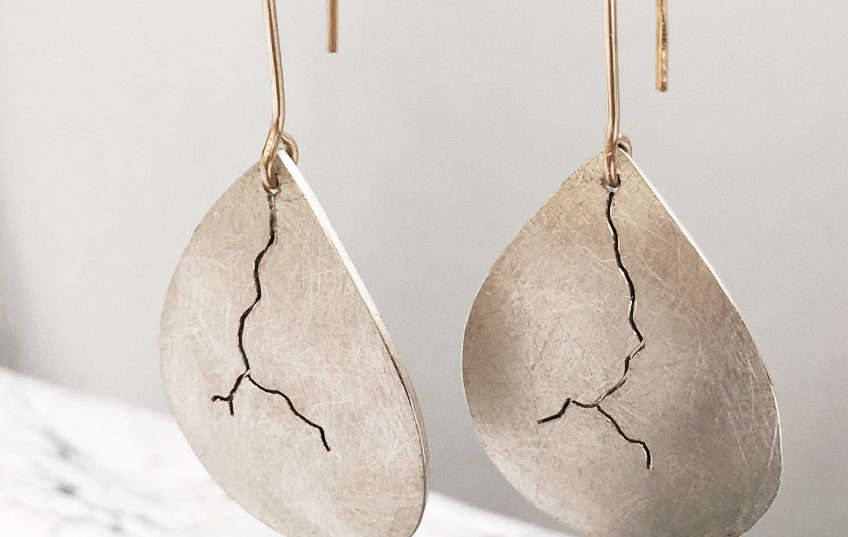 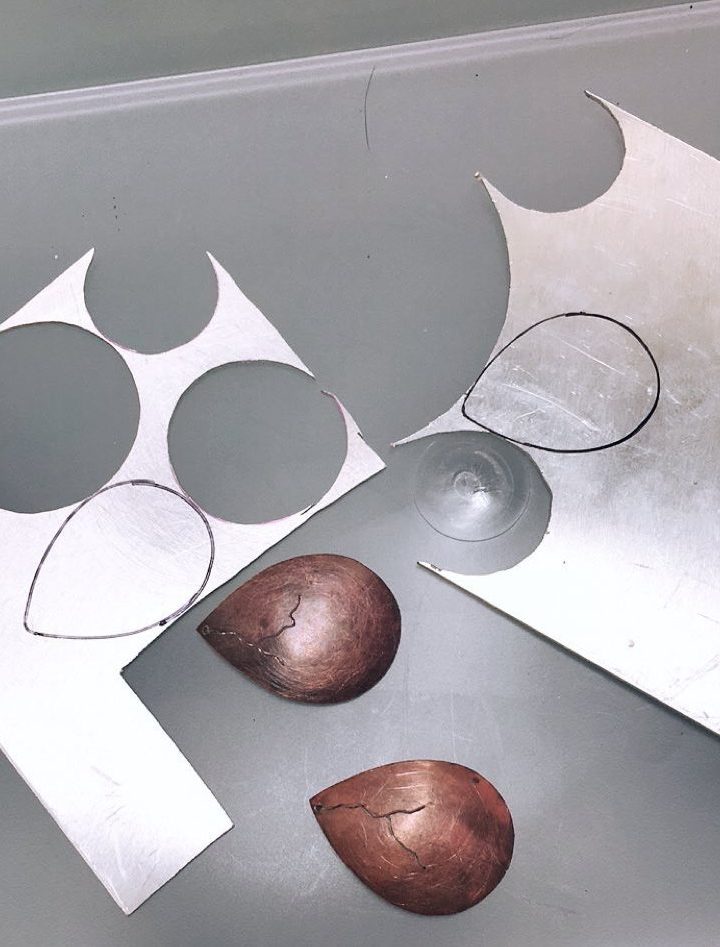 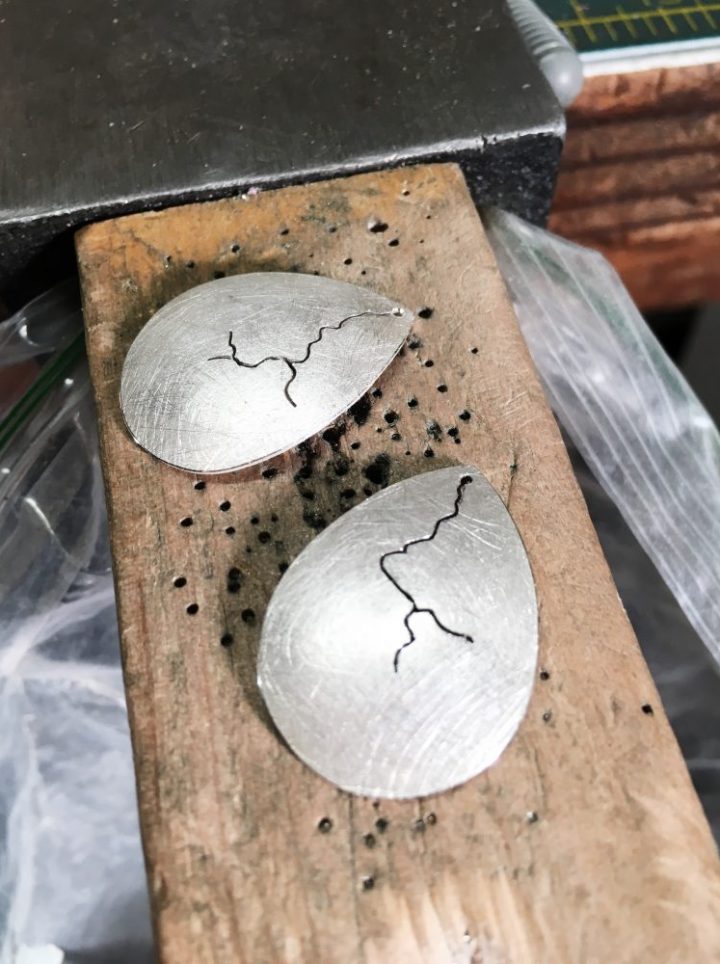 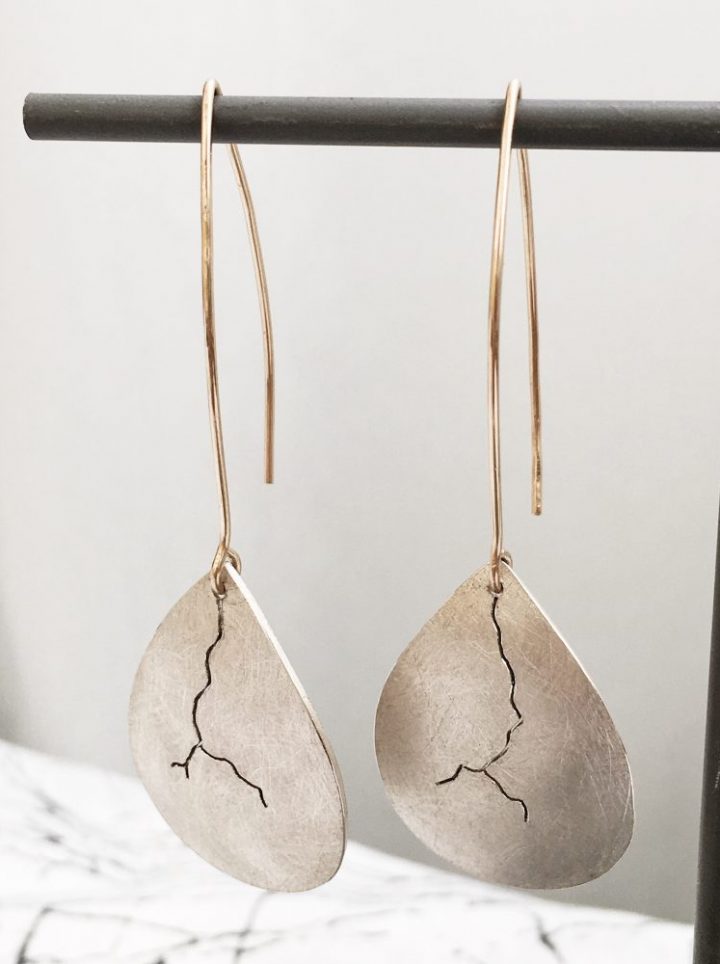 There are a variety of processes that I use to make my jewelry and utensils.  I rarely sketch. My brain is my sketch book! Most my work begins as an idea that is always inspired by the world around me!  From the idea I go to the metal - I almost never experiment in copper or brass; I experiment in sterling.  I know, I know…cringe!! But, there is an amount of seriousness and pressure I get from playing in sterling that forces me to get as much of it right the first time! I works for me.

I make every piece by hand.  This is a slow process and but it allows me to be part of every step from start to finish.  I shape metal using hammers and stable surfaces.

Every flaw that you see on my work is put in intentionally by me, using a jewelers saw and saw blades.  Because each flaw is hand sawn in, no two will be the same - like our own flaws, right?  Once a piece is assemble and I apply texture and color.  I'm attracted to contrast,  so with that most of my silver is patinated black.  The contemporary moodiness that a dark patina adds, helps set the tone and compliments my work. 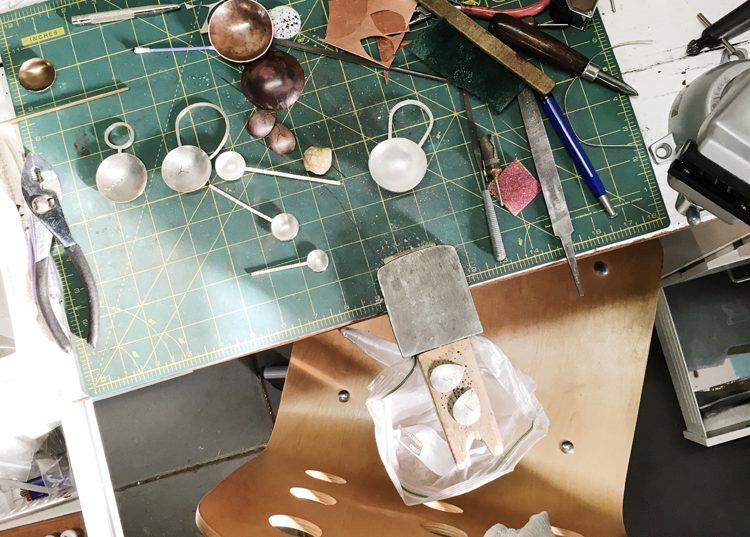 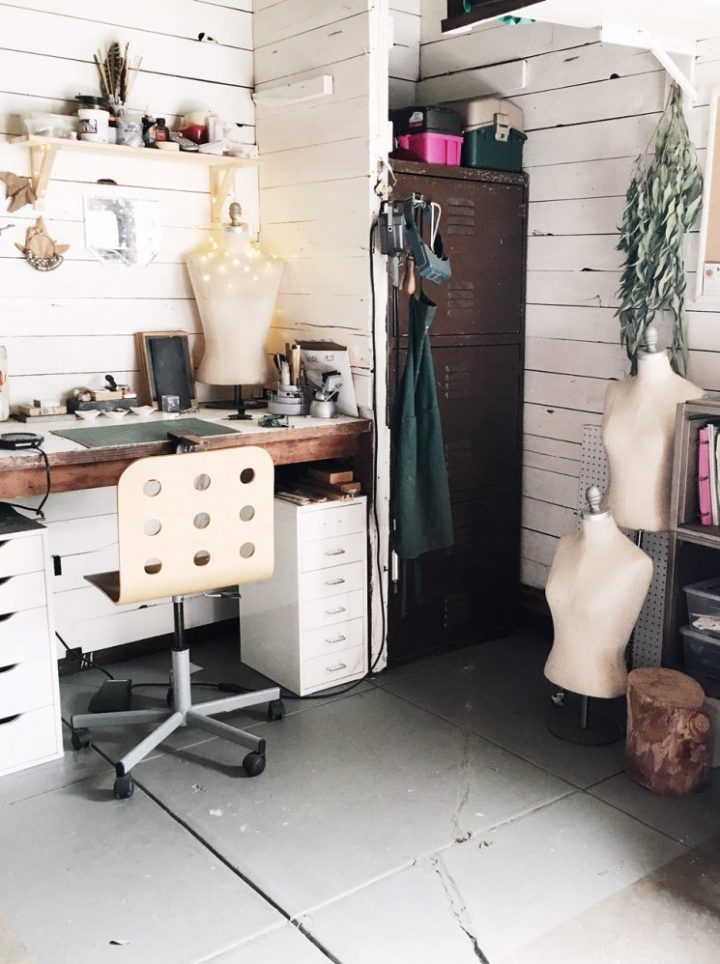 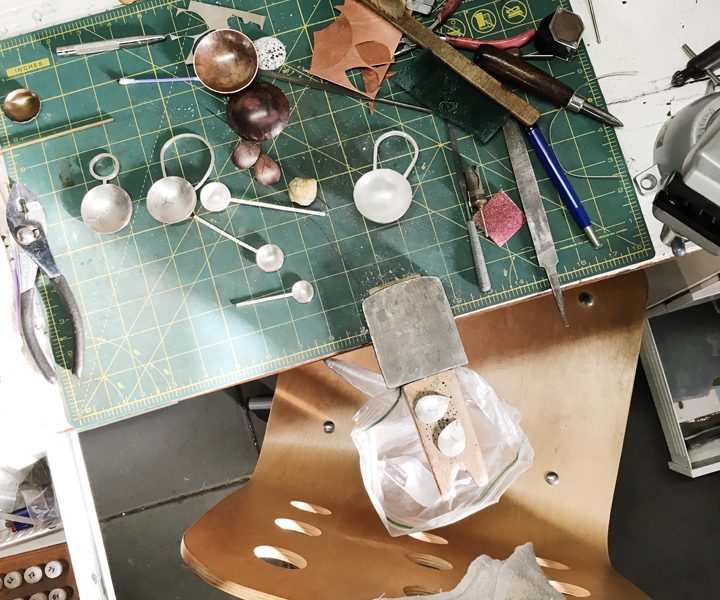 My studio is set up in my garage.  This is a blessing and curse;  you have the luxury of walking a few feet to work, and the distraction of home life in your face and on you mind all day!

I won’t lie, finding a solid routine can be a struggle.  It is something that I continue tweak.

Because I am a “creative” my mind tends to be everywhere.  One of my goals that I set is to be for Bless the Theory is to try different ways of doing things.  I started listening to the Flourish and Thrive podcast for business tips.  I have picked up some useful nuggets…one of which is; spending more time doing revenue gaining tasks!  This is something that can be difficult for me (and other creatives) as I find (and was taught) it is important to spend time experimenting and “playing” with your practice.  But, I’m curious to see the results so I switch gears and implemented some of the tips shared in the Flourish and Thrive podcast and have seen immediate results! By having a solid routine (or a least trying new ones out) I am honoring my business and my craft!

You can see more imagery of my studio space here! 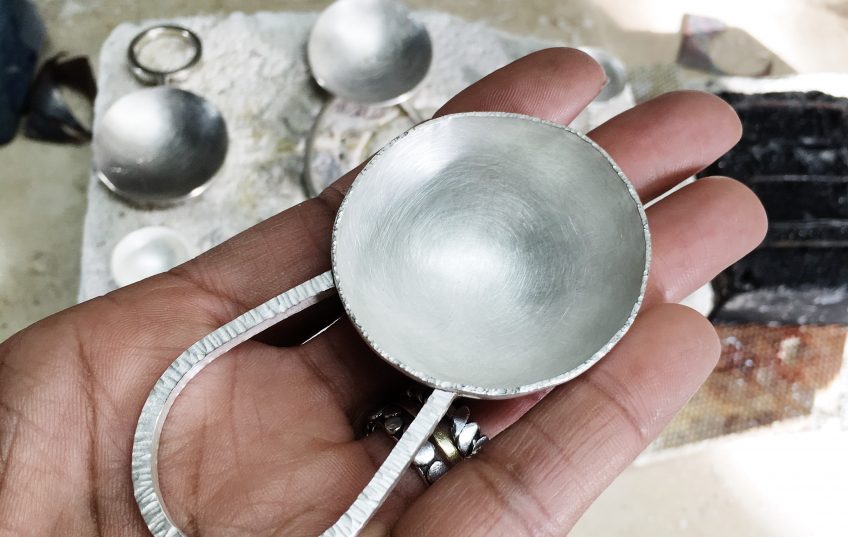 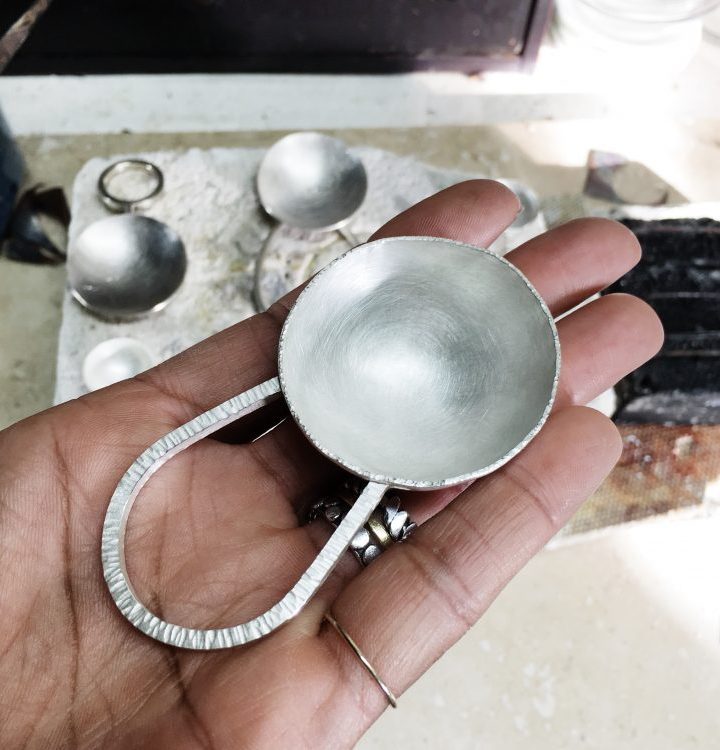 I love complicated pieces - objects that make me think…and possibly drink!  Spoons are currently "my favorite to make".   Making spoons requires strategic thought - not only about design but function - that can be challenging.  My jewelry also blesses me with challenges, often! There are a number of unfinished pieces on my bench begging to be figured out! 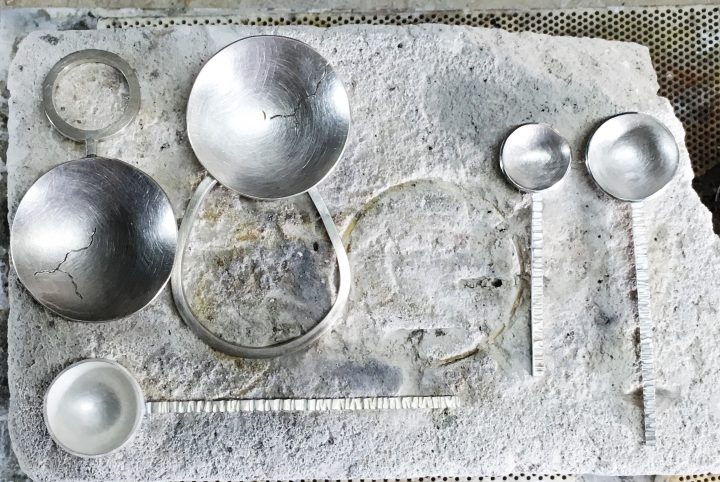 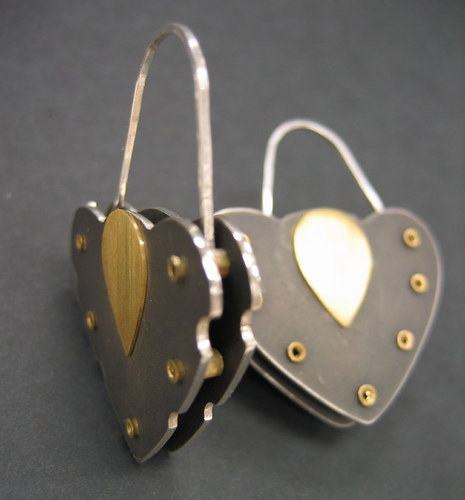 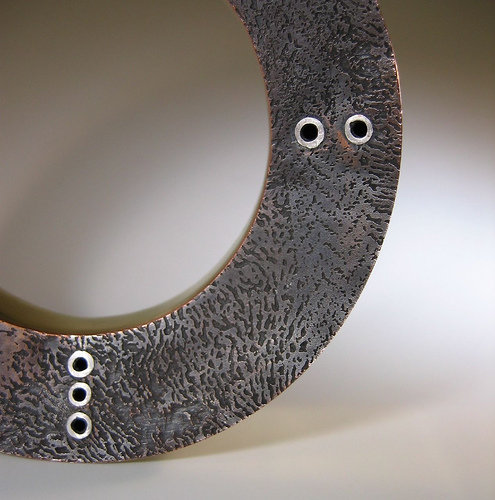 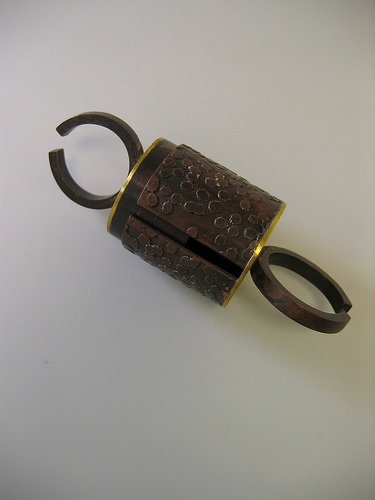 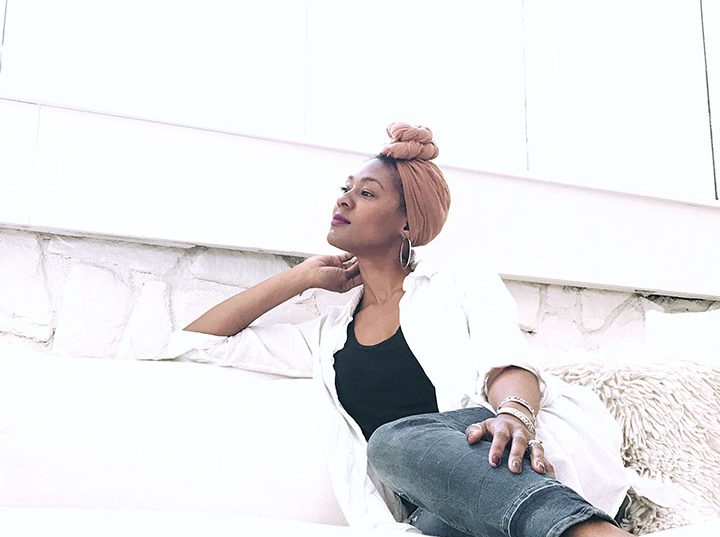 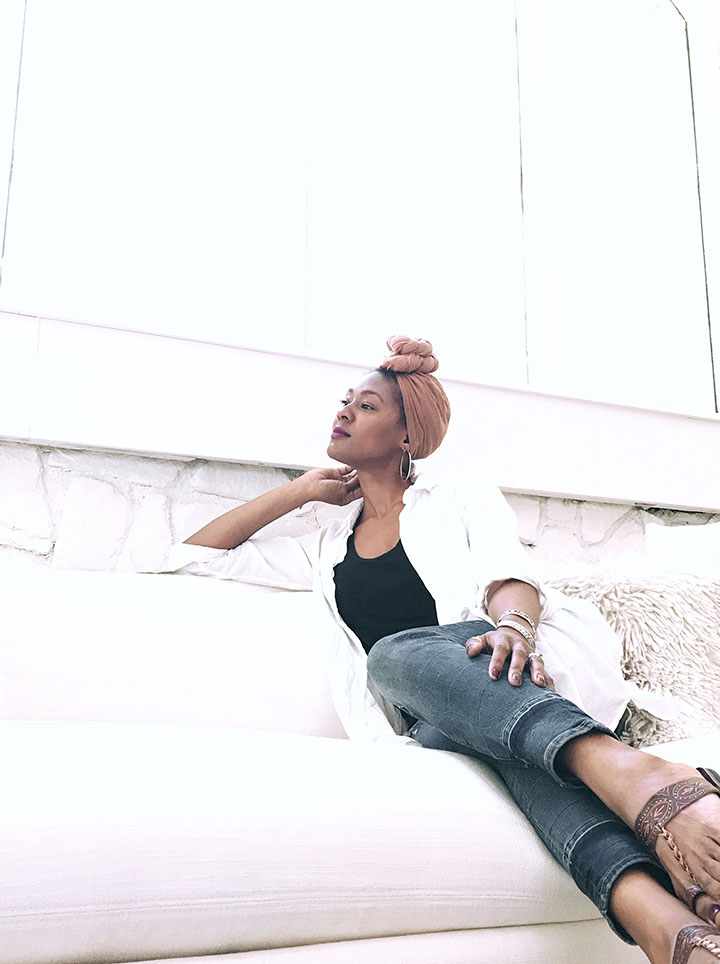 I figured it'd be a good idea to share my March Meet the Maker answers on my blog; for other people whom aren't on Instagram! Here are the first 2 prompts of the popular instagram challenge. Enjoy!

Hi! My name is Charmaine Vegas, some people call me Char, no-one calls me “Vegas”…although I kinda wish they would.   I am the creative mind, hands and soul behind Bless the Theory.   I make contemporary jewelry that is currently inspired by flaws. I work primarily in sterling and gold.  I also make functional objects for the home in copper, brass, sterling and gold.

I am from a lot of places (California, Bahamas, Hawaii) but I currently reside in Long Beach, California with my fiancé Brandon, our dog MoneyPenny and our cat Nya Grey!  My dream however, is to call the Netherlands home - I’m working on that dream! 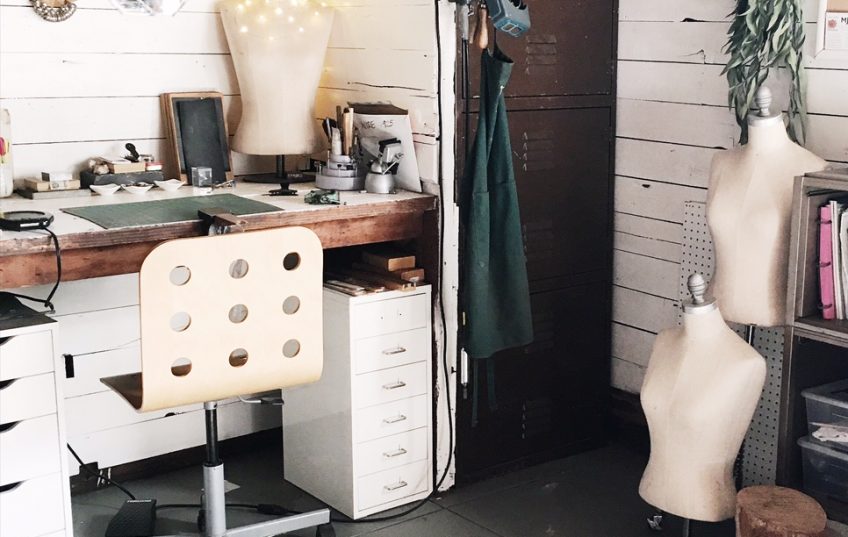 It's March! March 6th to be exact and it is that time of year for March Meet the Maker!

What is that you ask?  March Meet the Maker is a challenge put on by Joanne Hawker that gives makers the chance to talk about ourselves (because thats our favorite thing to do...yea right) how we got into this career of making, what we make, where we make and how we make.  It is also a great chance for us makers, of whom are on Instagram, to learn about other makers!.. and hopefully, maybe even, widen our artist communities. 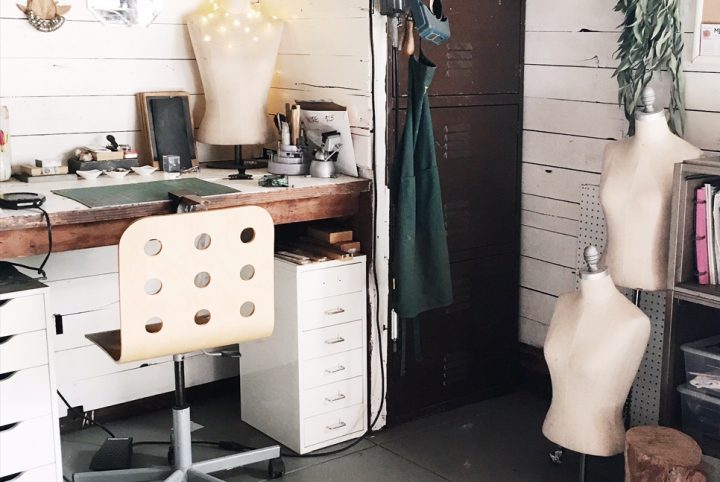 I first learned about March Meet the Maker this week...3 days ago!  And I first thought; "oh, how neat! This could be fun".   Then after finding more details about the challenge; I became a bit unsure.  Not only are you sharing  A LOT about yourself, you work and why you do what you do, you are also encouraged to post everyday for the month of March.  That is a substantial amount of posting...and quite a commitment.  And adding on top of that, I'd be 7 days behind...which means I'd have to play some catch-up.

Well, I decided to do it anyway!

If not now when? Better late than never! Do it while you can...blah blah blah.  Honestly I feel it will be fun and a great way to open up...which many artists aren't a fan of doing...especially on social media! So Challenge Accepted!

I will do my first post tomorrow morning and continue to post on my Instagram and maybe my Insta Stories as much as I can.  I will also do my very best to use some of that "sharing" over here on my studio blog.  That way I can add more information and photos, should it be beneficial to the topic.

Join in on the fun!

If you are interested in being part of the March Meet the Maker challenge, check out the website that Joanne Hawker has put together.  She made participating fun and pressure-free and there's even a cheat sheet of prompts to guide you along way!